Chris Hill, 1981-1987
After its first couple of years in Germantown, we moved City Paper to the northwest corner of 13th and Sansom. First task? Installing the handmade galley tables. (The paper was still built using long galleys  strips of print and hard-copy photos pasted onto cardboard sheets resting against angled plywood tables. I was the samurai of X-Acto blades, trimming galleys by the 100-feet-per-hour before pasting them in place.)

Once we’d made friends with the transvestites, sex workers and alcoholics who hung around the intersection at that time, we were ready to roll. (Our 13th and Sansom was not your 13th and Sansom.)

Every day we clustered around cheap tables and desks planning the next issue, or checking in on stories, or interviewing freelancers hungry for the $25/maximum we paid for most feature stories: myself, Violette Phillips, Ronnie Polaneczky and Mike McGettigan (now owner of Trophy Bikes). It wasn’t hard to feel an intimate connection to the life of the city as we glanced out the tall, grimy windows of the building and riffed and argued about how best to do what we all cared about most  telling a few true stories of the city. 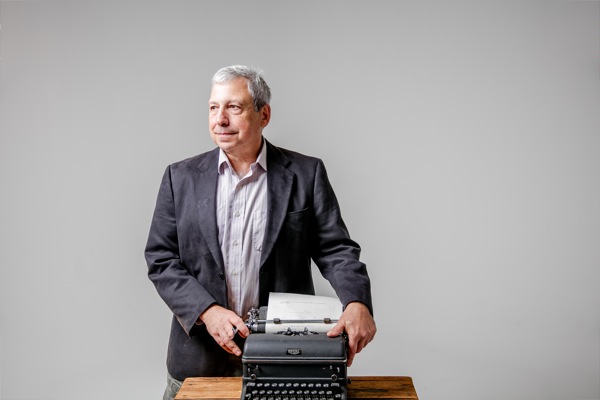 Bruce Schimmel, WHO KNOWS?-1996
I can remember getting a call from Susan Peiffer (now Metro’s director of digital sales). She was in a bookstore and Jerry Brown was there. He’d just announced his run for the presidency. She brought him to the paper, to my office, so there he was. I took a photo of him as I waited for a writer to interview him. The picture was so bad, he ripped it up and threw it away.

David Warner, 1997-2003
When I return to Philly these days, I think about the barely heated hovel City Paper occupied at 13th and Sansom in 1987, the year I came on as managing/A&E editor. I think about the much nicer space we moved to shortly after that on 12th  heat! carpeting! Woody’s! I think about the best corner office an editor ever had, perched above Second Street in a historic building in Old City. And when I see how those blocks have changed, I’m reminded that City Paper was not just there geographically, we were part of the change. We wrote about the Gayborhood. (I apparently coined the term.)

We wrote (and ate) our way through multiple restaurant renaissances. We were part of the explosion of Old City and the Fringe, film fests and murals, the theater and dance and gallery scenes. Would that change have happened without us? Who knows? But we were there to cover it.

Howard Altman, 2003-2004
If ever there is a dream gig in journalism, my nearly dozen years at the Philadelphia City Paper may have been it. I was able to routinely engage with folks from every community in one of the nation’s great cities. I was able to help guide the discussion of the day, work with a tremendous staff dedicated to shining light on the darkest places and have a whole lot of fun in the process.

From taking on Vinnie Fumo to investigating a corrupt mental-health clinic preying on the city’s most vulnerable to stumbling into a plot to sell access to the underground Pentagon, to so many more stories and columns, I did some of my best work at City Paper. And it was because of the time and space available to alt-weeklies in their prime, a gift to journalism and democracy now sadly taken away. Working just around the corner from where another weekly newspaper editor, some guy named Franklin, helped create a nation, is something I will always treasure.

Duane Swierczynski, 2004-2008
I joined City Paper during the lazy, hazy, crazy days of the second John Street administration, and it felt like stepping into a late season of a long-running soap opera. So much history. So many characters. It’s all kind of a blur, to be honest. But I do remember a few things.

I remember my first day, when I realized I didn’t have to wear a tie.

I remember weekly visits from our eccentric uncle (hi, Bruce).

I remember that landing a joke in Bell Curve felt like hitting the lottery.

I remember [news editor Brian] Hickey outside the Khyber, smoking all of the cigarettes.

I remember the day the piles of CDs and newspapers in Pat Rapa’s office achieved sentience.

I remember handling a metal tool designed to remove a man’s testicles.

I remember receiving bullets in the mail.

I remember the utter exhilaration of sitting around a table with some of the most creative minds in the city, dreaming up future stories, laughing a lot, fighting a little, but always feeling like a family  one I miss desperately.

But most of all, I remember waiting for movie showtimes to come in so that we could put the goddamned paper to bed.

Brian Howard, 2008-2011
When you worked for City Paper, you were a professional follower of your passions. For instance, my staff and I truly believed we could will the 2008 Phillies to be WFCs and Barack Obama into the White House (because you can’t be impartial after eight years of W). My most personal example of this passion play involved … biking in the nude. Unbeknownst to us, a group of cycling advocates had already begun plotting a Philly installment of the global event where exhibitionist bicyclists take to the streets sans clothes to promote  well, all kind of things  when City Paper decided to put a pair of cyclists, asses bared to the world, on the cover of our “Biketopia” issue. After that, the crew behind what would become the first Philadelphia Naked Bike Ride reached out to marvel at the serendipity, and I asked if I could embed with them to track their progress. Naturally, reporting turned into participation, which is how I unwittingly helped launch the city’s most creepily photographed annual event.

Theresa Everline, 2011-2013
What I tell people about my time at CP vacillates between the earnest and the idiosyncratic. There’s the story about a long-neglected, drug-ridden railroad property that spawned discussions between community members and owner Conrail, and there’s the author of that story plucking his homemade banjo outside my office.

But despite the pride I feel for the editorial staff’s important work, I’m opting for a humorous anecdote here.

A few months after I started, the issue’s Bell Curve column of jokes about the week’s events wonderfully and inexplicably riffed on trolls living under bridges and doing troll things. One joke went like this: “The Red Cross says blood supplies in the area are critically low. ‘Especially Christian blood,’ says spokesperson, also a troll.”

The next day I picked up the phone and heard, “I’m the spokesperson for the Red Cross. I can tell my boss those are jokes, right? Because I didn’t say that about Christians.” He paused. “And I’m not a troll.”