Ann Artist, lead performer in “Through the Glass Ceiling” 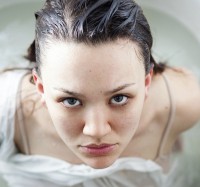 “They Call me Arethusa”

There are myriad ways to approach questions concerning gender, femininity and feminism.

Ann Wilson, director of the burlesque-dance-theater-improv extravaganza, Lovertits, posits one.

At some point we asked, if our clitorises were white men, who would they be?

But during Fringe this year, debate and conversation are framed more creatively.

Factory Productions  calling itself Philadelphias feminist powerhouse  this year announces a theme of empowerment with its show, Through the Glass Ceiling.

Were in a place we like to call no wave feminism, working toward the appreciation and celebration of the power of femininity regardless of gender or sexual identity, the two write.

Pointing to celebrities who em-brace feminism, like Beyoncé and Laverne Cox, Artist and Brazina explain thatsuch endorsement is critical because historically, female celebrities have been objectified.

Now these women are standing up and essentially say, Fuck the male gaze. Im powerful, Im a woman. This can really set a precedent for the future, because its bringing feminism out of textbooks again and putting it on our TVs, they write.

Gender equality, continue Artist and Brazina (who performs as Katie K Rex), is definitely at the forefront of the human rights movement right now, with stereotypes being challenged and defeated every day. For example, the visibility of transgender individuals and the fact that gender pronouns will most likely be out of style in generations to come, thats huge.

Tina Satter, writer-director of Half Straddles In the Pony Palace/FOOTBALL (and a New York-based Obie Award-winner), launched the project by considering which actors she wanted to work with, who all happened to be female or transgender.

It developed into this wonderfully theatricalized spin on the sport of football, which of course is this iconic male sport that feels at once universal, but then its something only men can play, so thats totally weird when you actually think about it … its really this highly segmented-out gender thing.

Instead, Pony Palace  hailed by the New York Times Jason Zinoman as a giddily exuberant con-fection  was driven by an artistic interest in the framework of this tough sport, and its specific aesthetics (the uniforms, the field, etc.) and the sports language.

But the fact that it became political in part by using female and transgender actors is really exciting and important to me, Satter continues. It flips and highlights questions of what is toughness, what is femininity, what is androgyny.

Her cross-gender examination of high school football and its complex social rituals and rites of passage, is definitely not celebrating or satirizing, she says, and theres no condemnation either  other than a reclamation of a really completely male dynamic, as owned in our show by a more complicated and unexpected dynamic of female bodies and energy, and then the exciting complication of also adding a transgender presence.

Actually, its much more about the concepts of sport and team, says the former athlete. I often feel like I may be the only voice in the room who does not think that sports and teams in general are problematic, and that there can actually be incredible personal and life things that one learns and gains [from sports]. Working on a show with my company often feels very much like a sports event.

A darker purpose drives writer-performer Colie McClellans They Call Me Arethusa, expanded after its successful run at the Piccolo Spoleto Festival in Charleston, S.C. McClellan uses Greek mythology, poems and Southern folklore in what director Mark Kennedy calls an O Brother, Where Art Thou?-style poetry slam to frame real stories of intimate partner violence with more universal truths. In a FringeArts blog interview, the Mason Gross School of the Arts at Rutgers grad cites three things she learned from creating the play: People dont talk about intimate-partner violence, everyone has a story and some people wont ever get it. Shes determined to keep trying, however: The stories of women who are chased and attacked and abused, they are all over the place. Ignoring things doesnt make them go away.

McClellan and Kennedy involved a South Carolina domestic violence shelter, My Sisters House, in audience talkbacks, and theyll do the same here with local groups. Id like the audience to come with open minds and ready hearts, McClellan says. Im not out to prove anything; Im just seeking to share and hopefully empower.

Some productions explore wom-ens rights in both factual and fictional historical contexts. Nellie/Nellie, an ensemble-created piece by The AntiGravity Theatre Project, is based on journalist Nellie Blys 1887 expose, Ten Days in a Mad-House. To uncover abuses in a womens mental health facility, Bly feigned insanity, was declared positively demented, and got sent to Blackwells Island (now Roosevelt Island) in New York, where she survived treatment resembling medieval torture alongside women who were often not insane, but merely destitute or ostracized. She faced similar treatment at work.

Journalism is still a male-dominated world, says director Michael T. Williams, and the barriers that Nellie came up against  she quit her first job because she was expected to write about decorating and entertaining, and had to sneak into the offices of the New York World to ask for a job  are still present.

Wild Plum Productions Christine Emmert and Katherine Mallon-Day adapted the 1890 Charlotte Perkins Gillman short story The Yellow Wallpaper for the stage, and also play its two roles. Its an important feminist short story about the treatment of women who suffered from hysteria and postpartum depression, says Emmert. Women are often treated for mental illness in ways different than males. They are still considered more emotional, and the use of medication and other methods for marginalizing them is often considered important in their treatment.

In the story, a woman is kept in solitary in a room with hideous yellow wallpaper when she starts to see other women who have her sympathy, Emmert explains. Its a neurotic form of sisterhood, but one which she comes to believe in.

Also in the festival lineup, dancer Sus-an Chase stages her story of sur-viving breast cancer in Susans Un-doing, which evolved from journal entries written to maintain her san-ity. A professional ballerina, she struggled with the loss not only of phy-sical abilities, but a distorted self-image because so much of her pri-or identity was tied to those skills. Though she has completed treat-ment, she is still recovering emotionally.

Chase also had to navigate my way through the impersonal, fre-quent-ly inscrutable medical quagmire. She was afraid of recurrence and radia-tion, she recalls, but found little under-standing until she finally saw a female doctor. These male doctors keep telling me that I should have breast-conserving surgery, she rec-alls confessing, but I cant help think-ing that thats because female breasts are so important to them, not to me.

When a woman is diagnosed, Chase explains, She knows instantly that her sexual identity is going to have to change … breasts are an important part of a womans identity, both as the source of nourishment for your chil-dren and as one of the primary tar-gets of male fixation and fascination.

Lovertits Wilson believes people can be educated and titillated at the same time.

I think we, as humans, are far more complex creatures that we give ourselves credit for on a day-to-day basis, and Im not sure art always reflects that complexity, she says.

Thus Wilson arrives at Lovertits essential question: Is it possible for women to be naked and observed as creatures who embody a great variety of things, including their sexuality? I find so much that we have to choose: if we are naked we must be being sexual, and if we are smart we must keep our clothes on. The dichotomy is starting to soften, I think, and I would love for Lovertits to help erase that line completely.

This piece, titled after aggressively, unapologetically sexual artist Peaches song, deals with womens bodies in particular, and perhaps thats what makes it feminist, but I also think that feminism, in its broader definition, advocates for more freedom for everyone.

Only Lovertits, however, answers Wilsons if clitorises were white men question. The answer, amusingly depicted in publicity images, is  Mark Twain.

The image on his mouth is an anatomical drawing of the clitoris, she explains. Thats the entire clitoris, wrapping around the vagina. It wasnt until 2005 that scientists discovered that the clitoris was much more than that little nub were familiar with. Thats less than 10 years ago. And also, that thing looks like a mustache. Or a cats face. The image speaks to the question  what if we looked at the knowledge weve acquired as humans, which has been heavily biased by the white male perspective, and recast it from a female perspective? And what if we did it with lightness and humor?