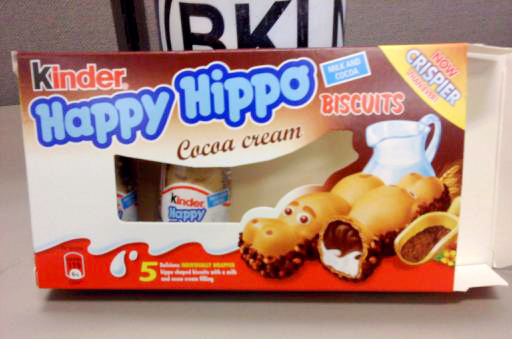 OK so we don’t really rock this feature on a weekly basis anymore, but we’re gonna keep on calling it Weekly Candy, in the same spirit of Conan O’Brien continuing his “In the Year 2000” bit well after the turn of the century.

IN QUESTION: Kinder Happy Hippos. The hippo character was originally created for Ferrero (which makes Nutella) in 1987 by artist André Roche to be placed in “Kinder Surprise” choco eggs, and soon became so popular that the company decided to turn them into their own snack. First released in ’93, Ferrero takes the famed hippo-shaped wafer cookies and injects them with a milk-and-cocoa cream on top and hazelnut cream underneath. To top it off, tiny bits of meringue coat the exterior of the cookie, giving it a slight crunch.

HOW MANY DO WE EAT IN ONE SITTING: One package yields five hippos but they’re pretty small. Maybe I like to overindulge when it comes to candy, but I ate all five in 5 minutes. Let’s just say they’re just as addicting as Nutella.

FINER POINTS: In case eating a whole box wasn’t satisfying enough, check out the brain-cell killing commercial that made Happy Hippo a star in the first place.