You walk into the Shiloh Baptist Church on Montrose Street for the Fringe show Unarmed. Before you even sit, you see a naked Black man lying face down at the middle of the stage. Hes fallen, dead.

How do you feel about that body? Whats your relationship to that body? Would you do anything to help that body, if you could?

Those are the questions Arielle Pina, director and producer of Unarmed, says you could entertain upon beholding this Fallen Black Man character in the show. 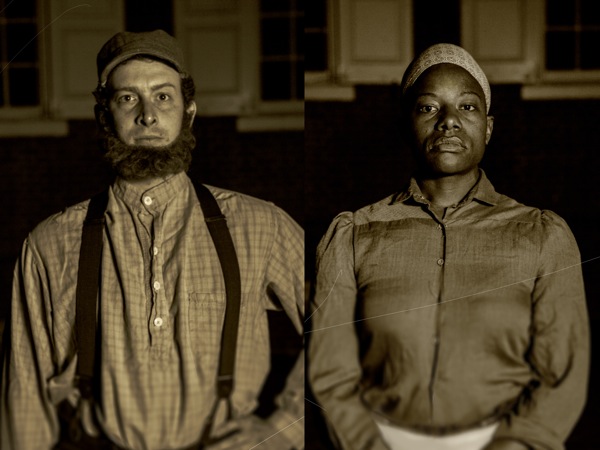 We see in media, or hear about in media, Black Americans getting killed  but we dont have to look at it for an hour, Pina says. We see it for five minutes and then keep going with our lives. The choice to include such a character, she says, is different than being able to shut off the news.

And what Pina says of her show could ring true for any of the handful of shows touching on racial issues in this years festival: Its going to be uncomfortable, its going to be difficult, but I hope you stay.

This year, Curated FringeArts show Underground Railroad Game takes on race relations in America by way of, among many other things, a troublesome middle-school lecture about the Civil War. Unarmed uses dance and other disciplines to reflect Americas failure to confront racism. The Colored Girls Museum exposes the audience to a small sampling of colored girl herstory. The Illinois Five tells the story of five African-American male friends who find themselves in the middle of a race riot in the 20s. And Black Male Revisited employs monologue, poems, songs and cabaret to explore existence in a Black body.

You could look back at the past few years seemingly unrelenting onslaught of tragic headlines that sparked discussion, protests or violence about racial issues  everything from Trayvon Martin to #BlackLivesMatter to Freddie Gray to Sandra Bland  and think, Well, now that racial tension is so explosive in America, of course there would be an onslaught of concurrent, topical art and theater.

That shits been going on forever, says Jenn Kidwell, co-creator and co-performer, along with Scott Sheppard, of Underground Railroad Game, balking at some medias alarmist proclamations that only now are things reaching a boiling point.

Pina agrees. We didnt used to have so much video footage of police brutality or violence in general; its just so ap­par­ent now in our culture, we see it all the time, that I think artists this year are like, all right, lets try something.

Kidwell continues, We would be very ir­responsible if we were even trying to be opportunistic, if we were saying This is so au courant! How em­bar­ras­sing would that be?

This is nothing new, says Jaamil Kosoko, cre­ator of Black Male Revisited. [Its not like] oh, you know, Tray­von was mur­der­ed, I need to make a show about Black male death. Weve been dying in this country for cen­tur­ies. Im just hap­py that its finally getting some kind of attention.

These ideas, these concepts, have always been at the forefront of my thinking, he continues. They have to be  I dont have the luxury of taking off my skin.

There is a palpable frustration in his show, he says, relating to how long its taken for some of these racial issues to reach the forefront of our cultural consciousness. He says Black Male Revisited gently pokes fun at the cultural establishment, the gatekeepers of the industry.

I cant help but be frustrated, but at the same time  better it be later than never, Kosoko says.

After the events in Ferguson, Mo., Pina captured and exhibited a series of photographs of people without shirts, backs to the camera and hands behind their heads, as if being arrested. In April, when Freddie Gray was killed, I was just so angry about it. [I thought] it would be a waste of the work if I didnt do something with it. That day, I registered for Fringe.

There was a sense of urgency, she says.

It felt like my life depended on making this piece right now; because so many Black Americans are being killed right now.  This is the way I know how to respond.

Emotionally it was very hard for me as a Black female artist  to express anger and that be OK; there is the stereotype of the angry Black woman. There is definitely an undercurrent of anger in parts of [Unarmed].

Unarmed tackles issues, Pina explains, like how white affirmation is important for Black visibility  if theres a Kanye West or Jay-Z happening in America, its only validated if the white population is completely behind it, as well as micro-aggressions (like being mistaken for the help in a restaurant or store when youre a person of color) and how one deals with their own privilege.

The cast members of Unarmed, who identify as Black, mixed-race, Latina and Caucasian, engaged in exercises and discussions during rehearsal about how they identify with race, the stereotypes attached to other races and issues surrounding racial and socioeconomic privilege.

Once we got that out, it was a lot easier to trust each other, she says.

The Colored Girls Museum is meant to be an open dialogue between participants and concept, between viewer and collaborator, says Vashti DuBois, founder and director of the piece, which takes place in a home in Germantown.

I have no preconceived notions of what The Colored Girls Museum will be. The women and girls who lend their stories will determine that, she says.

The colored girl owns a unique and powerful historic and cultural perspective  it is my hope, and my intention that this museum will serve as a safe space to unpack and share those perspectives and our stories.

There are about 12 artists involved, from musicians to fiber artists. Audiences have a chance to interact with the creators as they move about the museum.

DuBois says she thinks a potential audience member might tell themselves, Thats probably gonna make me feel uncomfortable, or its not about me, its about Black people.

But shows about race create opportunities for dialogue and engagement for everyone, she says.

You have to want [diversity in the arts community] as a city and be honest about the ways artists of color are always marginalized, have to be working harder than everybody else to get chosen  to have a voice  to have their perspective not be token but a necessity, a welcome gift.

And when it comes to audience members potentially being uncomfortable, FringeArts president and producing director Nick Stuccio says, well  good.

There is literally no line you cant cross, he says of artists creating Fringe work. If you imagine a taboo line  make the piece you wanna make, go there and go 10 times beyond it.

I think its interesting for this generation to talk about these issues of race and political correctness, Stuccio says. As they grew up, they were hammered [with] the notions of being very, very sensitive. Thats why Im really interested to see the nuance with which they take on these issues.

It does have a way of making particularly white audiences, more conservative audiences, feel some kind of way, but you know, thats for them to feel, he says. He sees himself more as an educator.

What will his show teach?

Were more alike than we are different, we all have a sense of complexity, he says. The media has a way of simplifying the Black experience, particularly the Black male experience in this country, as super brute or from slave to superhero, but what about the mundane complexity of just being a human? Im still fighting to be seen as a fully realized human being. I dont know if white people get that idea.

But theres an entry point, he says, for all people in this work.

The Illinois Five explores the story of the characters who escaped the 1920s race riots, but swore to meet again when the violence ended, says playwright Teresa Miller.

This story is about the paths they took, Miller says.

It will show people who arent African-American that under the constraints of what was nationally going on at the time, there was even a greater issue at stake to be close-knit, to survive by any means necessary, she continues.

But, again, its not just a Black experience story. Its about humanity.

This show expresses another side of people thats not often seen. The human condition lies within all of us, but its conveyed by way of the African-American experience, Miller says.

The show, really, is about choices.

Sheppard experienced a Civil War curriculum in fifth grade at Hanover (Pa.) Middle School, where he says there was a real romance about that war and a pretty intense re-enactment culture. The kids were split into two groups  Union soldiers and Confederate soldiers. While learning the history, they played re-enactment and Civil War games for points.

We came across some tricky territory, Sheppard says.

In each of the fifth-grade classrooms, there were boxes representing states. There were also little Black slave dolls. The Union soldiers played abolitionists, who had to sneak the dolls around and bring them to the safe house. If they got to Canada, they were free. There was even a display case of freed slaves.

The Confederate soldier-students, however, had to catch the students with the slaves.

[They were] effectively playing bounty hunters, or slave catchers, Sheppard says. This years graduating class from Hanover, he says, was the last group to participate in the curriculum.

If you asked any of those teachers, Im sure theyd say  they believe in equality, its about education, its an optimistic look at how slavery was starting to come to an end. But what actually happens is this objectification of the Black body, the dehumanization, and once again they are the objects of a history that is written and perceived by white people.

Underground Railroad Game, Sheppard and Kidwell say, is meant to confront and poke fun at a culture that would conceive of such a game.

American popular culture hasnt been much better at tackling the tough subject of race, Sheppard believes, citing the movie The Blind Side as an example.

I hope people realize how terrible [that movie] really is, Sheppard says, launching into an impassioned, impersonation-filled minutes-long rant about the film and its hokiest scenes.

The popular modes for Black and white people coming together and reconciling their differences, and making progress are so fucking disgustingly flawed, he says. That is part of what the two hope to tackle in the show.

Tropes theyll also attack: the magical Negro, the white savior and the politics of the n-word, as well as the themes of power and competition.

One of the things that this piece has allowed us to do is attack other ways in which progressive people or liberal people or forward-thinking people continue to harbor beliefs that are prejudiced, like those [Hanover] teachers, without even knowing, he said.

They want simply to change the conversation, not provide answers.

Growth doesnt come from answers, Sheppard says. If its an answer, its too simple. Thats The Blind Side, making white people around America feel like theyre not racist anymore. There are a lot of shows out there that present these topics in such a way that the audience is left off the hook.

Underground Railroad Game doesnt do that.

During Fringe this year, were all on the hook.